So this has not been my best racing year. But instead of letting that discourage me (as it did after the Rock ‘n’ Roll debacle in November), I’m looking to the bright side, asking myself, “What can I take from this experience?” And hopefully, next year, the high-price I’m paying for this data collection will turn into a Boston qualifying time as a 40-year-old even though I will not be 40. I repeat, I will not be 40. Yet.

I knew going into the Publix Women’s Half-Marathon that I wasn’t prepared. Not to top last year’s PR, anyway. I have been running regularly, but hadn’t gone further than 7 ½ miles. And yet, when I stood at the start line, the plan to start slow, run by feel and finish strong, disappeared along with all my best judgment. You know, that thing that tells you not to eat Mexican food the night before a race? (Which I also did.)

As always, the first mile was great, except that I was alone. That morning my running partner, Lindsay, called to say she wasn’t going to race because the forecast promised a downpour. Lindsay doesn’t run in the rain, in the wind, in temperatures below 48 or above 78, or on Fridays. Some would call her a finicky runner, but I prefer “particular.” She also told me that she’s also never going to race again.

I had already retied my shoes twice, visited the bathroom three times and re-checked my Garmin’s charge at least a dozen times. Racing makes us all anxious.

It’s true that there’s a lot of pressure—pressure we put on ourselves. I know I’m probably not going to win a race unless it’s made up entirely of 3-legged Chihuahuas, but I do want to get faster, beat my best time, maybe even snag an age-group medal. I don’t pay upwards of $25 to race for fun; I’ve come to accept this about myself. Many people can and do, and a part of me admires that—that 1% of me who says things like, “Just do your best.” But the other 99% of me might be a little competitive (and my sister just rolled her eyes at my use of “might”). And in age-group racing, our biggest competitor is always our self.

My self was fast last year.

This year, my less conditioned self went out too fast. I managed to hold pace for nearly 3 miles, somehow forgetting that there would still be 10 to go. I slowed considerably, and then, around mile 6, I retched. The retching continued for the next three miles, fist to mouth, trying to keep what I imagined to be a flaming, devil-faced fajita from coming up. I was thirsty. My head ached. I considered the medical tent, but knew as soon as I stopped I’d feel fine and the medics would be all, “Oooh, are you tired? It’s a race, you’re supposed to be tired.” (OK, a medic wouldn’t say that, but I would.)

On the switchbacks, I could see I was losing distance. When the 1:45 pacer passed me, it would take everything I had to stay under 2:00. About 2 miles from the finish, I saw one of my daughter’s 4th-grade classmates working the water station.

“Mrs. Goto!” she yelled out enthusiastically, waving her arms. I pulled myself together, because while it’s cool to be a mom who can run a half-marathon, it’s totally not cool to throw-up on your daughter’s friend. In fact, it’s social suicide.

Faking that you feel good always helps. I smiled big, took a swig of water and headed toward the finish. Shortly thereafter, I heard the sweet twang of Lindsay’s voice cheering me on. She ran alongside me for about a tenth of a mile, and those were the best steps I’d taken all day.

I didn’t fling my fajitas. I finished strong. I also finished 14 minutes off last year’s time, but still under 2 hours. See, that’s what you have to do to reconcile a bad race. You have to consider the worst-case scenarios and appreciate how they didn’t happen: At least it stopped raining. At least I didn’t fall down. At least a 3-legged Chihuahua didn’t beat me.

But here’s the real takeaway: train for the distance you want to run.

Today, Lindsay and I began training for the Azalea 10K with a clearer purpose. And yes, we’re going to race together again…weather permitting. 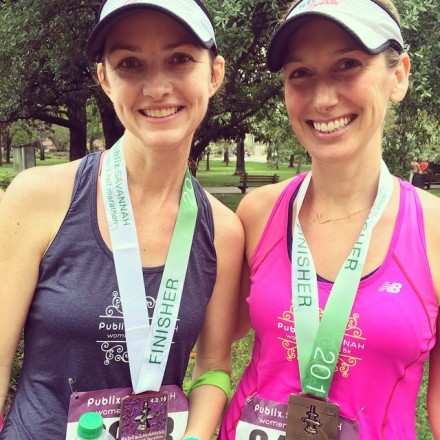 My other running partner, Robin, got a PR–without training. But I don’t like to talk about that.