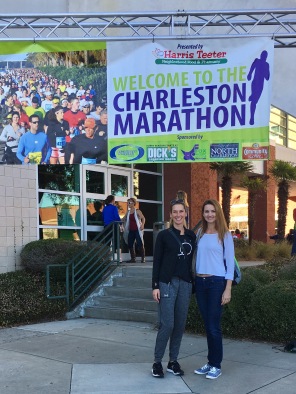 Two weeks leading up to my fourth marathon, I started to believe I was cursed. My running partner, Robin, got suddenly sidelined and the doctor said she may never run again. Lindsay’s father-in-law went into the hospital—then her mother-in-law—and so she pulled out of the girls’ weekend she was going to share with us. My foot ached, my car broke down, my retainer fell out, I smashed my nose on the door (my husband says I need whiskers), my throat was starting to feel scratchy and the grocery was out of beets.

During my last 8-miler before the race I nearly face-planted while crossing the highway. Like, arms windmilling frantically, feet flailing behind me in big loping strides so as not to crash into the pavement with my recently un-retained teeth.

“I can’t catch a break,” I complained to my husband when I got home. “I’m having the worst luck.”

“Or,” my husband began, “maybe you have good luck.”

Usually I’m totally a glass is half-full kind of girl, but when you’re about to do something as crazy as run 26.2 miles, you look for anything as a sign not to do it.

The day before the marathon—on Friday the 13th nonetheless—the stars aligned a bit.

Robin was treated and cleared by a super-awesome sports PT to run. I didn’t come down with the flu, didn’t break my leg, my foot miraculously healed, and I settled for a jar of pickled beets.

Robin and I checked into our hotel and it was surprisingly nice for the price. The expo was a breeze, we had a great dinner, got to bed early and I actually managed to sleep a few hours.

I got to the start in plenty of time with my satellite secured and my intestines emptied. I pushed my way to the front so as to avoid getting caught in a crowd of runners. And then I was off.

By mile 8, I had already built a three-minute buffer into my qualifying time. It felt easy. Like I could hold an 8:20 pace forever.

The drop was sudden. Without any warning, my body announced, “I think this is as far as we’re going to go today.”

I know all too well that mile 11 is much too early to encounter “the wall.” And yet, there it was, an impenetrable concrete metaphor standing firmly between me and my Boston qualifying time. Maybe even between me and completing the race altogether.

Then I thought about Robin, running her first marathon. And Lindsay, watching my pace from home, cheering me on. And the $100 I spent to run 26.2 miles, which really stung.

I pulled myself together best I could, gave myself permission to let go of the goal I’d work 5 months to reach, and just tried to put one foot in the front of the other for 15 miserably long, hot and humid miles.

Because when there’s nothing else to do, you might as well just finish.

Finishing that race as a biped was absolutely the hardest thing I’ve ever done. After crossing the finish at 4:19, I flopped down on the ground in complete exhaustion. The sun beat onto my worn body until I caught a glimpse of Robin heading toward the finish. I rose as awkward as a newborn colt, trying to gain my balance on cramping legs. And then I forgot everything—about my curse, my missed goal, and my crappy race. In short, I forgot about me and cheered Robin in to her very first marathon finish. She was beat. Broken. Humbled. Exhausted. She was absolutely amazing.

That, after all, was the real reason I had to finish.

So proud of her!