Claudia, me and Lindsay: Friends at the start.

Things were going mostly as planned. My running partner Lindsay and I were 3 miles into the Azalea CrimeStoppers 10K run and holding steady at an 8:20 pace. She was on-track to run a sub-52 minute PR and first-ever age group win. It was a first for me, too—as a pacer. Lindsay and I had been running together for two years, and I’d seen her get consistently faster but she had yet to earn a medal—that non-precious junk dangling from a chintzy wrapping ribbon that most grown-ass women stopped lusting for around the age of 10, and yet, here we are. Because regardless of how poorly designed the medal, or how silly we think it is to hang one around our necks for anything less than an Olympic achievement, we all want one. And I was certain that if Lindsay were able to relax, turn on autopilot and let me set the pace–like I’d done when my friend Claudia paced me–she would crush her goal and get a medal. And I wanted to be right next to her when she did.

Well, just behind her.

See, in my yet-unwritten book of running partner etiquette, when you sign up to pace, you forfeit the win. There’s no glory in encouraging your partner steadily along a course only to out-stride them in an in-your-face sprint to earn a finish she already knew you were capable of getting. Unless, of course, you don’t like having friends.

Pacing isn’t about putting anything in anyone’s face. It’s not even about you.

I could tell that while we were holding pace, mile 3 wasn’t being kind to Lindsay. I know this because of the choice words she used to tell me. So I spent the second half of the race running through a bevy of ridiculous and annoying “you-can-it” affirmations to the point where I couldn’t even handle my own cotton-candy coated grossness.

“You’ll feel great as soon as it’s over!” (Astute revelation.)

Then, with only a mile to go, Lindsay declared: “I’m going to walk.”

“Hell you are. I don’t walk.” (Cotton candy dissolved.)

She didn’t. In fact that little firecracker perked up and started picking off women I determined to be in our age group.

I knew the PR would be close, but the medal was all but guaranteed. The last 25 yards, Lindsay sprinted to the finish while I sat on her heels and cheered her across the line, just a few seconds behind. She got the PR, but we’d have to wait on the hardware.

They announced third place in our age group, giving it to a woman we passed near the finish. Then…

I assumed my chip didn’t register. I assumed I somehow got disqualified. I assumed too much.

I look incredulously at Lindsay, who deadpanned, “You can’t even let me win.”

But she did win. I saw her tiny little booty cross the line in front of me. Unless my bib magically flew off my shirt and across the finish, I was clearly behind her.

And there I learned my first lesson in pacing: don’t cross the start line two seconds in front of your partner and finish one second behind. It’s basic math, which I’ve never been very good at. Now I’m not much of a pacer, either. As far as friends go, that’s kind of up in the air, too. 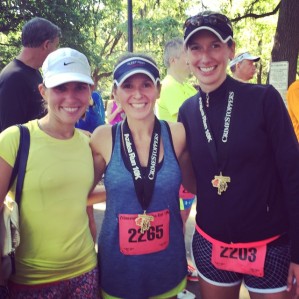 Lindsay laughed it off, but it still haunts me. I’m so proud of her for getting a PR and her first medal, but she deserved first. She went home and showed her son, and he teared-up.

“Imagine what he would’ve done if she got first place,” my husband said, always a source of support.

I refused to hang that albatross around my neck for too long for fear it would weigh down my conscience or choke me. I can’t even place it in the shelf next to my honest, hard-earned medals.

Maybe I’ll put it on the shelf of hard-earned lessons.

First day of fifth grade--last first day in elementary 😫
Representing at Girls on the Run!
So much to celebrate! Honored to run with and for Anita at Ava's first 5k!
Happy Birthday to my little peanut!
We are Georgia.
I'm sure she's a very nice lady #thathair