I was coming off my fastest year yet. I PR’d or placed in every run I raced in the 2014/15 season. I beat my previous year’s marathon by 24 minutes, finishing at 3:48, and charged to a 1:40 half-marathon PR time. For me, these were not only victories, they were incentives to push harder. I set my sights on qualifying for Boston in 2015—the Mecca of marathons. I even told people about my goal, knowing that saying it out loud meant I would do it.

But by spring we had moved into a new home and I let the first qualifying opportunity pass by, knowing November’s Rock ‘n’ Roll Marathon here in Savannah—a course I’ve run many times—would give me another opportunity. Then my friend Robert, who played an enormous role in Savannah’s running community and was a personal inspiration to me, died tragically, and running stopped feeling like that thing I escaped to, could excel at and could count on to kill me but never quite. It felt…complicated.

Nonetheless, I half-heartedly approached the first week of my marathon training and immediately irritated my IT Band—my first injury in 20 years—sidelining me for four weeks. So I took it as an opportunity to re-evaluate my goals. I would put Boston on hold and instead train hard for the Rock ‘n’ Roll half with my running partner, Lindsay.

And yet I get up four to five days a week, lace up my shoes and run, imagining that it will get easier again, another PR will be reached and Boston will come. Eventually.

Every day I wake up and try to do and be better. I say I’ll eat better, drink less, write more, laugh harder, love deeper, run faster. Most times I don’t and then I’ll try again tomorrow. But, every now and then, I do.

Today I had my first good run in weeks. Rain forced Lindsay and me inside on a bone-jamming gym treadmill for speed work. My earbuds kept falling out of my ear. Without them I had the limited choice of Fox News and ESPN. I tossed the earbuds, ignored the TVs and just ran. I ran each 800 faster than the last, trying to see how much I could take. Turns out, I could take more than I expected.

We’re all distracted and affected by the endless challenges life throws at us. I’m behind on my grading. Our previous house has not sold and I know we can’t float two mortgages much longer. Tomorrow my dad undergoes a back surgery. My sister has discovered a lump in her leg.

But I also believe with all my heart that things will improve—that I will improve along with them. Because, really, what are the options? It’s the possibility of tomorrow that makes today’s challenges survivable. 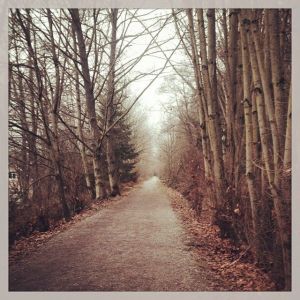